Disintegration of a comet observed by UCLA astronomer 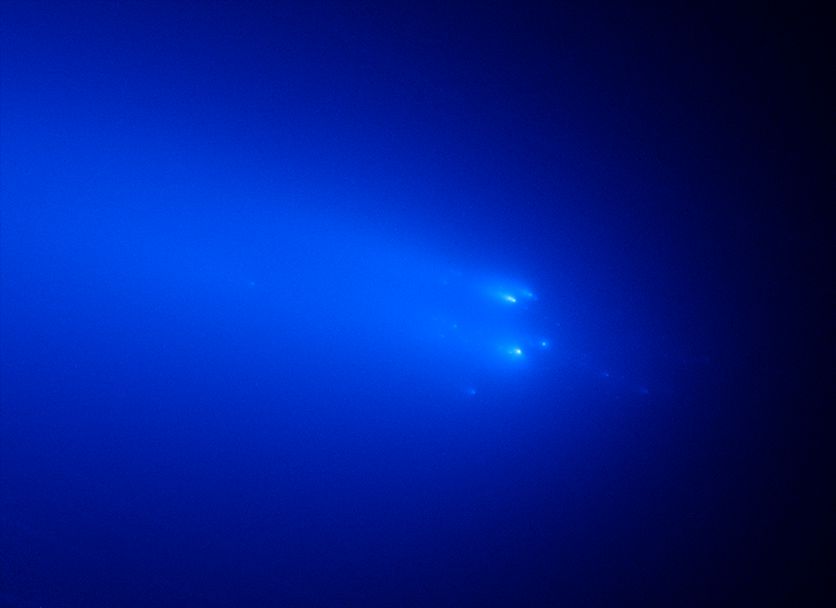 The images are the sharpest views of the death of the fragile comet, called C/2019 Y4. Jewitt estimated that many of the fragments are approximately the size of a house.

The observation provides evidence that comet fragmentation is probably common, and may even be the dominant mechanism by which the solid, icy nuclei of comets die. Because comets’ deaths tend to occur unpredictably, reliable observations of their demise are rare, and astronomers are largely uncertain about what causes them to fragment.

Comets are icy bodies thought to be fragments left behind when planets form in the outer parts of planetary systems. Images from the Hubble are giving astronomers a look in unprecedented detail at the comet’s pieces, which may yield new clues about the breakup.

“Breakup, although still not well understood, could be the main destructive process for comets,” said Jewitt, a UCLA professor of planetary science and astronomy and leader of one of two research teams that photographed and analyzed the comet.

Jewitt said the appearance of the comet’s fragments changed substantially from April 20 to April 23, when the images were captured. “I don’t know whether this is because the individual pieces are flashing on and off as they reflect sunlight, acting like twinkling lights on a Christmas tree, or because different fragments appear on different days.”

The comet, an aggregate of primordial ice and dust, has had a rather dull life, spending 4.5 billion years in a vast, icy region of our solar called the Oort cloud, Jewitt said.

“Suddenly, it’s been thrust into the hot zone near the sun and the stress of the new environment is causing it to disintegrate. It is quite special to get a look with Hubble at this dying comet.”

The comet was discovered on December 29, 2019, by the Asteroid Terrestrial-impact Last Alert System robotic astronomical survey system, known as ATLAS, which is based in Hawaii. This NASA-supported observing program operates two autonomous telescopes that look for comets and asteroids approaching Earth.

C/2019 Y4 brightened quickly until mid-March, and some astronomers anticipated that it might be visible to the naked eye in May, which could have made it one of the most spectacular comet sightings of the past 20 years.

However, the comet abruptly started to get dimmer instead of brighter. Astronomers speculated that its icy core may be fragmenting or even disintegrating.

C/2019 Y4 was located inside the orbit of Mars, approximately 91 million miles from Earth, when the latest Hubble observations were taken. If any of it survives, the comet would make its closest approach to Earth on May 23, when it would be about 72 million miles away.

From the UCLA Newsroom: newsroom.ucla.edu/releases/disintegration-of-comet-observed