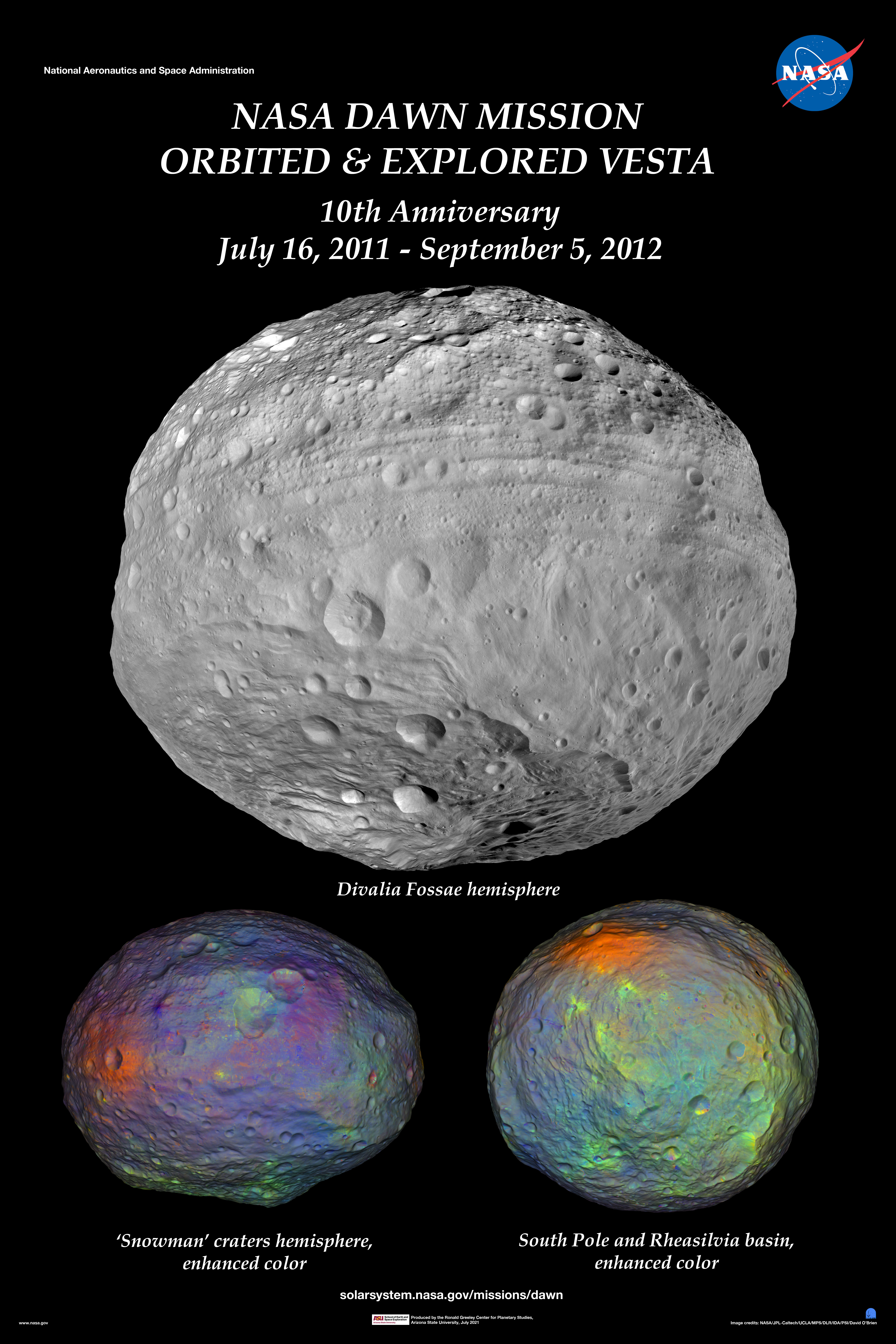 On July 16, 2011, NASA’s Dawn spacecraft entered orbit around protoplanet Vesta, the first of two objects it would explore in the Main Asteroid Belt between the orbits of Mars and Jupiter.  Vesta has about 3 times the surface area of the states of Arizona or New Mexico. It was discovered by telescope in 1807, becoming the fourth body known in that part of the Solar System. Scientific interest in Vesta grew significantly 150 years later, when telescopic observations revealed that the reflected light spectrum of the asteroid matched a family of meteorites, the HED family (for howardite-eucrite-diogenite), as well as a family of smaller asteroids in similar orbits as Vesta around the Sun. The minerals in the HED meteorites suggest that they formed by ancient basaltic (Hawaii-like) volcanism, indicative of planet-like internal heating and separation of the interior into a crust, a mantle, and a dense core.  The similar spectra of the “Vesta family” of asteroids suggest that Vesta may have been struck by a city-sized impactor that ejected rocks to produce its asteroid family. Thus, a goal of the Dawn mission was to study Vesta and confirm it as the source of the HED meteorite family.

This poster shows multiple views of Vesta obtained by Dawn’s German-built camera. The large central black-and-white photomosaic, constructed from many small images, shows an equatorial view centered on the hemisphere with a series of Grand Canyon-sized ridges and grooves that run parallel to its equator, named the Divalia Fossae. The image also shows that Vesta is not spherical, but rather is irregular, resulting from two large impacts that struck near the south pole.  The largest south polar impact, which produced a large crater named Rheasilvia (seen in the enhanced color image at lower right), excavated crust and mantle materials, some of which were ejected from Vesta to form its family of smaller asteroids.  The Rheasilvia impact also produced seismic waves, in which some of them travelled along Vesta’s surface, forming the equatorial ridge-and-trough system over a billion years ago.

What about the HED meteorites? In the enhanced color image at lower left, notice the purple materials around the three impact craters informally called the "Snowman craters." This material, as analyzed by Dawn’s Italian-built visible and infrared mapping spectrometer and U.S.A-built gamma ray and neutron spectrometer, is rich in minerals found in eucrites. The yellow and green areas in the image at lower right, in the Rheasilvia basin floor, are rich in minerals found in diogenites excavated from Vesta’s upper mantle. Thus, Dawn demonstrated Vesta is indeed the source of the HED meteorites, and it had enough internal heat to differentiate (separate) into a crust-mantle-core configuration, just like Earth.  The black-and-white images of Vesta were obtained from an altitude of about 130 miles (210 kilometers) at a resolution of 66 feet (20 meters) per pixel. The enhanced color images of Vesta, processed to show differences in composition, were obtained from an altitude of 420 miles (680 kilometers) at a resolution of around 210 feet (64 meters) per pixel.

Launched in 2007, Dawn used ion propulsion to reach Vesta in 2011. It departed Vesta in 2012 and arrived at dwarf planet Ceres in 2015, where it remains in orbit following the successful conclusion of its mission in 2018. The Dawn mission was operated and managed by NASA's Jet Propulsion Laboratory in Southern California.

For more information about the Dawn mission, visit https://solarsystem.nasa.gov/missions/dawn/overview/