With a team of researchers, Dr. Edward Young showed how a method for identifying atmospheric contamination of volcanic-gas samples reveals variations in the isotopic composition of nitrogen in the mantle, and provides a clearer view of the origins of this element in Earth’s interior.

Earth’s nitrogen-rich atmosphere contributes to the pleasant surface environment in which we live and breathe — but makes it very difficult to determine the nitrogen isotope composition of anything else. Pervasive atmospheric contamination of samples derived from Earth’s mantle poses a formidable challenge to anyone investigating the origins and transport of volatile species, such as nitrogen and the noble gases, in the deep Earth. In a paper in Nature, Labidi et al. report that they have used a ‘clumped isotope’ method to identify uncontaminated mantle nitrogen in volcanic-gas effusions and gases trapped in volcanic-rock samples. The relative abundances of isotopes in uncontaminated nitrogen vary among samples from different locations. The authors argue that these differences originate from Earth’s formation and have survived approximately 4.5 billion years of mixing associated with mantle convection. 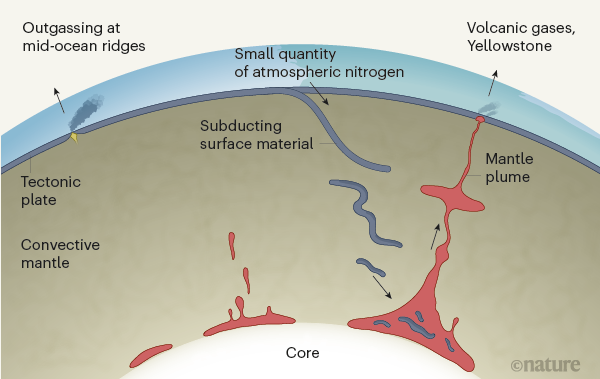 Figure 1 | Nitrogen in the deep Earth. Labidi et al. report a new method for identifying contamination of volcanic gases by nitrogen from the atmosphere. The authors find that the nitrogen isotope composition of gases extracted from mid-ocean ridge basalts, which sample the convective mantle, is different from that of volcanic gas from Yellowstone National Park in the United States, which is thought to sample an upwelling mantle plume that originates in the deep mantle. By modelling transport of surface nitrogen into the mantle through subduction (the process in which one tectonic plate dives beneath another and descends into the mantle) and nitrogen loss (outgassing) from the mantle, the authors argue that only a limited amount of nitrogen from Earth’s surface has been incorporated into the mantle. They conclude that the observed variations in mantle nitrogen isotope compositions reflect differences that originated early in Earth’s history.