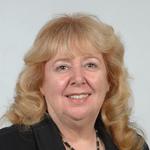 Janet retired as director of information protection and assurance for Boeing in 2006, after 11 years at the company. Prior to her time at Boeing, Janet was the director of information technology at the Metropolitan Water District of Southern California. From 1987-1991, she was senior vice president of decision support for Carter Hawley Hale Information Services, which owned the Broadway department store chain. She also spent the first 20 years of her career in various positions at IBM. Janet received her bachelor’s degree in chemistry from UCLA and her involvement with the university has remained strong over the years. She’s a member of the South Bay chapter of the Chancellor’s Associates and a board member for Women and Philanthropy. She is especially passionate about astronomy and volunteers with the Friends of the Observatory program at Griffith Observatory and as a docent at Mount Wilson Observatory. She is also a member of the Board of Trustees for the South Bay Botanic Garden.