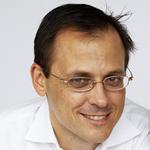 Fritz Demopoulos has been involved in a number of entrepreneurial and philanthropic activities over the past two decades, mostly within the Greater China region. He is passionate about establishing businesses and creative disruption, exploring the ideas behind science and science fiction, and contributing to his community through education and gender equality. Fritz co-founded Qunar, one of China’s largest online travel marketplaces, which listed on the NASDAQ exchange in 2013 before merging with its rival Ctrip in 2015. He also co-founded Shawei, China’s largest online sports media company, which was acquired by an affiliate of Hong Kong conglomerate Hutchison Whampoa Limited. He also had senior executive positions at The News Corporation Limited and Netease.com. As a big supporter of UCLA and a native of Southern California, Fritz serves on the Board of Advisors of UCLA's Department of Earth, Planetary, and Space Sciences as well as the UCLA Center for Management of Enterprise in Media, Entertainment and Sports. He also sponsors UCLA's Velocity Women's Summit. Fritz earned an MBA from UCLA and a BA from Cal State Fullerton. He is a long-term resident of Hong Kong with his wife and two daughters.