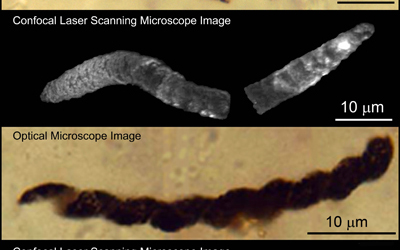 UCLA paleontologists are involved in projects spanning the entire fossil record, from the original of life to recent speciation events. Faculty and students are documenting extraordinarily slow rates of evolution among cyanobacteria; establishing and revising the classification, taxonomy and biostratigraphy of Neogene foraminifera; calculating where the iridium anomaly should be in K-T boundary sections; interpreting the evolutionary dynamics and the mechanisms of species flock formation among freshwater African gastropods; producing 3-D computer images of blastoid hydrospires; using molecular techniques to establish the relationships of the chordates and their sister groups; investigating the relationship between sea-level changes and mass extinction; reconstructing the nature and dynamics of proteins and the evolution of complexity; collecting and compiling morphometric data on North American carnivores with aims at interpreting their ecology; studying the paleobiology and paleoecology of late Cambrian molluscs of the western US; documenting the global stratigraphy and taphonomy of the Ediacaran faunas; investigating the origin of molluscs and near-molluscs; and developing quantitative methods for assessing the completeness of the fossil record.