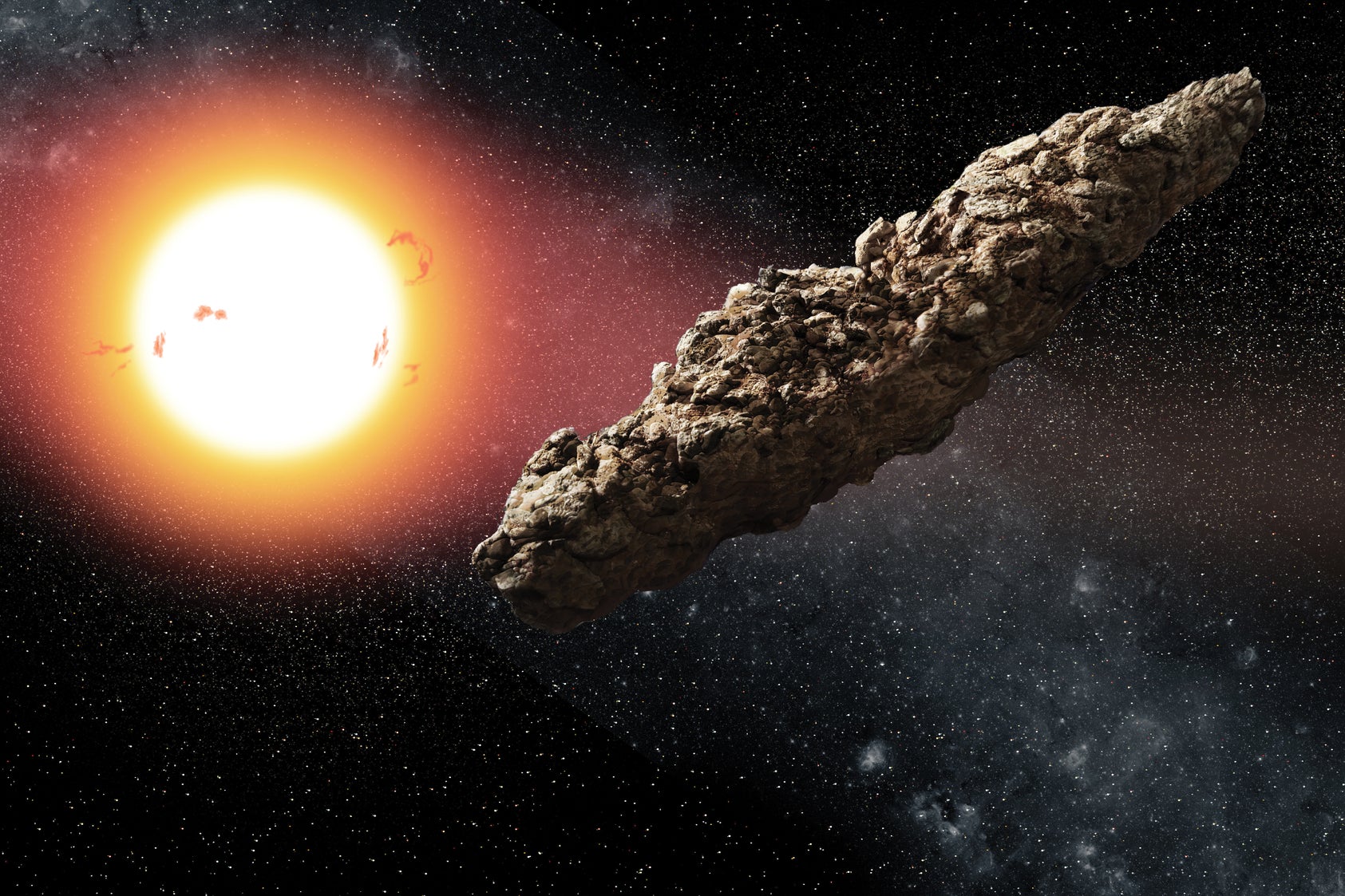 1I/‘OUMUAMUA, the first interstellar object ever observed in the solar system, passed close to Earth in 2017. Credit: Ron Miller

David Jewitt is an astronomer at the University of California, Los Angeles, where he studies the primitive bodies of the solar system and beyond.

Amaya Moro-Martín is an astronomer at the Space Telescope Science Institute in Baltimore. She investigates planetary systems and extrasolar comets.

Strange bodies from beyond the solar system have defied predictions

Late in the evening of October 24, 2017, an e-mail arrived containing tantalizing news of the heavens. Astronomer Davide Farnocchia of NASA's Jet Propulsion Laboratory was writing to one of us (Jewitt) about a new object in the sky with a very strange trajectory. Discovered six days earlier by University of Hawaii astronomer Robert Weryk, the object, initially dubbed P10Ee5V, was traveling so fast that the sun could not keep it in orbit. Instead of its predicted path being a closed ellipse, its orbit was open, indicating that it would never return. “We still need more data,” Farnocchia wrote, “but the orbit appears to be hyperbolic.” Within a few hours, Jewitt wrote to Jane Luu, a long-time collaborator with Norwegian connections, about observing the new object with the Nordic Optical Telescope in Spain. Many other observatories around the world were simultaneously scrambling to spot it.

So began a new era in astronomy. Renamed C/2017 U1 (the “C” standing for “comet”), then A/2017 U1 (for “asteroid”) and, finally, 1I/‘Oumuamua, the object turned out to be the first body astronomers have ever seen in the solar system that originated outside it. The “1I” in its designation indicates its official status as the first known interstellar object, and the name ‘Oumuamua—“a messenger from afar arriving first” in Hawaiian—was proposed by Weryk and his colleagues, who had used the Pan-STARRS telescope on the Hawaiian island of Maui to make the discovery.

What first caught the observers' attention was the object's extreme speed relative to the sun. After accounting for the pull of the sun's gravity, ‘Oumuamua had an excess speed of 26 kilometers a second (58,000 miles an hour). No interaction with a solar system body could generate such a kick, and the sun's gravity cannot capture something moving so quickly; ‘Oumuamua had to have come from outside.

What kind of journey must this object have taken? From what we can tell, it could have been wandering the galaxy for hundreds of millions of years. Observations suggest that it came from the direction of the bright star Vega, in the constellation Lyra, although Vega would not have been in the same spot when ‘Oumuamua was there roughly 300,000 years ago.

Although astronomers have long believed that interstellar bodies pass through the solar system, actually finding one was a big surprise. Only the year before, an exhaustive analysis by Toni Engelhardt, then at the University of Hawaii, and his colleagues concluded that prospects for identifying such an interstellar interloper “appear to be bleak”—they were thought to be just too small and faint for us to have much hope of finding them. But as we discovered more about ‘Oumuamua, our surprise turned into utter bewilderment. Everything from its shape and size to its lack of cometlike properties ran counter to our expectations. If this was a typical visitor from the greater universe, we had a lot to learn.

This article was originally published with the title "Interstellar Interlopers" in Scientific American 323, 4, 42-49 (October 2020)