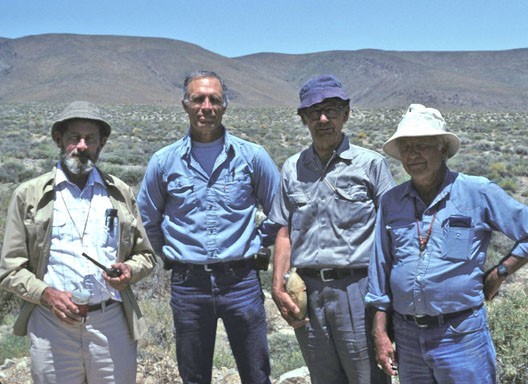 Gerhard Oertel, thoughtful mentor and influential scientist, passed away peacefully on January 14. He was 100.

Gerhard Oertel was a quiet achiever, who joined the Department of Geology at UCLA in 1960 and retired from the Department of Earth and Space Sciences in 1990, prior to the elimination of the age limit. Always a gentleman, he once thanked a colleague for “criticisms that led me to express my views much more cautiously, especially where they seem to disagree with his.” Gerhard earned a Doctorate in the Natural Sciences (Dr. rer. nat.) with Hans Cloos at the University of Bonn and married Irmgard Blüher, a budding biologist whose studies were interrupted by the second world war, in 1946. In his research, Gerhard used geometry and physics to understand the deformation of rocks such as slates by taking features of known original shape and measuring and analyzing their changed shape following deformation. This approach was pioneered by Hans Cloos’s younger brother Ernst Cloos in the 1940s using oolites in the Appalachian limestones of Maryland; Gerhard developed it into a rigorous, mathematically based tool for structural analysis.

Gerhard was born in Leipzig in April 1920. He began work in Scotland in 1948 with a short-term position at the University of Edinburgh. What followed was work with a Portugese petroleum company in Lisbon, where the growing family thrived, and after that the excitement of geological mapping and living in Goa, then still a colony of Portugal.

During 1966-1967, Gerhard and Irmgard were again back in Scotland, where Gerhard was supported at the University of Edinburgh with a Guggenheim Fellowship. There they continued a long collaboration with Gordon Craig, a paleontologist who helped found the fields of paleoecology and taphonomy—the study of processes responsible for transforming living organisms into fossils. Two notable outcomes were Gerhard’s influential article with Craig on deterministic models for populations of living and fossil animals and Irmgard’s sensitive translation into English of Wilhelm Schäfer’s Actuopälontologie nach Studieren in der Nordsee, which was edited by Craig and published in 1972 by the University of Chicago Press as Ecology and Palaeoecology of Marine Environments.

At UCLA, Gerhard worked collaboratively with Doug Rumble on a structural test of X-ray petrographic analysis, with Clem Nelson and John Christie on the emplacement of the Papoose Flat pluton, with An Yin on the Ninemile fault and Lewis thrust of Montana, and on a great variety of other small and large tectonic problems. He was a graceful and generous colleague, offering coffee and conversation to a small but rotating group of invitees most afternoons. One of the coffee club regulars was Will Newman, who shared with Gerhard the rarefied distinction of having written a textbook on continuum mechanics. Will’s Continuum Mechanics for the Earth Sciences is a Cambridge product, whereas Gerhard’s Stress and Deformation: A Handbook on Tensors in Geology is from Oxford. They spoke affectionately about Will’s big book (181 pp.) for graduate students versus Gerhard’s little book (292 pp.) for undergraduates.

Gerhard will be remembered as a mentor who always took a personal interest in his students. He was admired for his sense of humor, his kindness, the careful and thoughtful way in which he addressed scientific issues, the breadth of his interests outside of science, his loyalty to family and friends and his concern for the less fortunate.

Gerhard and Irmgard were married for 59 years when she passed in 2005. Gerhard then moved to Madison, Wisconsin and joined the structural geology group at the University of Wisconsin-Madison, acting as tutor and role model for graduate students in structural geology. In 2008 he met Edna Kram and they decided to settle in Santa Rosa. Gerhard passed peacefully there on January 14, after a short illness and nearly 101 years. Those of us who remember Gerhard are grateful to have had the privilege of knowing him.