A team including EPSS Proffesor David Jewitt discovers an additional 20 moons of Saturn. 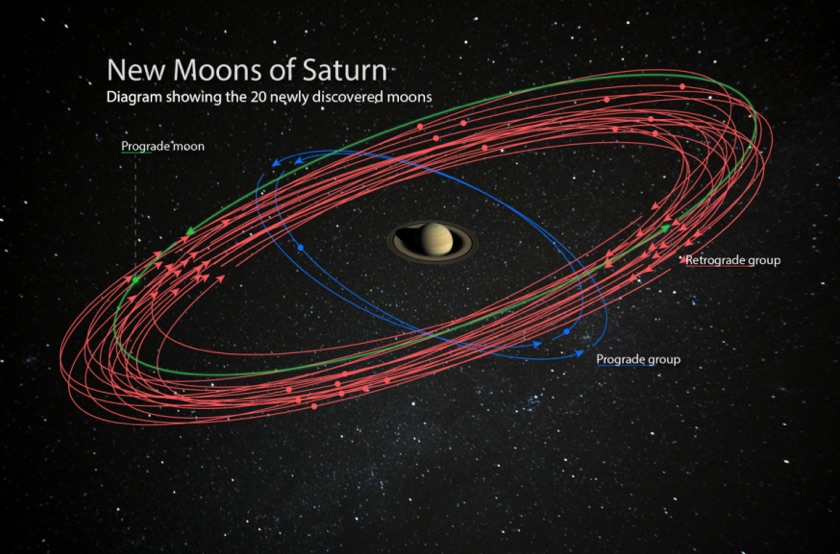 Schematic diagram showing the orbits of the 20 new moons, color coded as red = retrograde, green and blue = prograde, in two distinct groups. Illustration is courtesy of the Carnegie Institution for Science.

A team including UCLA's David Jewitt has discovered an additional 20 moons of Saturn, bringing the new total to 82. This breaks the record previously held by Jupiter, which has 79 known moons.

The new objects are all small, typically a few miles in diameter, and can only be seen using the world's largest telescopes. Like most known moons of the planets, they belong to the "irregular satellite" class, which is distinct from the more familiar, and usually larger, "regular satellites". The irregulars follow huge, looping orbits about their planets, typically highly inclined to the planetary equators. A majority of them are retrograde, meaning that their sense of rotation around the planet is opposite to the planet's spin. Of the new moons, for example, 17 are retrograde while only 3 share the prograde spin of Saturn. These characteristics indicate that the irregulars were captured after forming elsewhere in the solar system, probably near the time of planet formation. The mechanism of capture is not well known and the region from which capture occurred is a subject of continuing research. One idea is that they formed in the Kuiper belt, beyond Neptune. Another is that they formed near their host planets and represent surviving fragments left over after planetary accretion. Understanding the nature of the irregular moons and their peculiar orbits both informs and constrains models of the formation of the solar system.

Read more at these links: